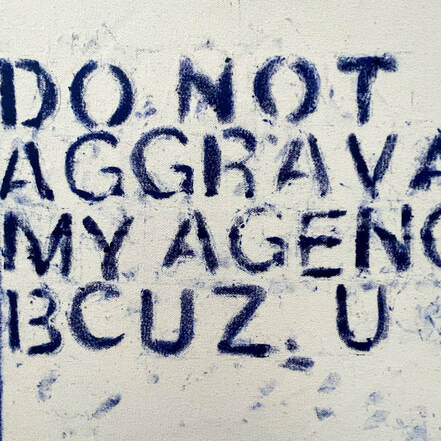 This Would Be A Perfect Opportunity To Quote Me
Completed & Works Still In Thought | Friday | May 6 2022 | 7-10pm
Otis College of Art & Design | Galef 219
MANIPULATING INTUITIVE MARK-MAKING LENDS TO THE ENUNCIATION OF ABSTRACTION: CAUSING AGGRAVATION, TENSION, AND DESIRABLE ENGAGEMENT.

TEXT, IN HELVETICA FONT, GREETS THE VIEWERS DIRECTLY, WITHOUT NUANCE.

THERE IS A POTENTIALITY TO HAVE AN INTERSECTION OF UNDERSTANDING- DESPITE PERCEIVED CULTURAL DISSONANCE WITH LANGUAGE.

USING OIL PAINT, PAPER, TAPE, AND GLUE—-MARKS OF INTENTIONAL SCRAPING ALLOWS THE CANVAS TO TRANSLATE THREE-DIMENSIONALLY. AS A CURIOSITY TO CONSIDER VIDEO AS A LAYER ON CANVAS, THERE IS NO RESTRAINT TO LIMIT THE BUILDING UP OF MATERIALS TO "TRADITIONAL" MODES OF MAKING.

THE GOAL IS TO GENERATE A MODERN EXPERIENCE.​
Suni Mullen was born in 1994 in West Hills, California, and currently lives and works in Los Angeles, California. She is studying Fine Arts at Otis College of Art and Design (BFA , ‘23). Mullen is the recipient of the Duff Family Scholarship, Otis Presidential Scholarship, and MAF LA Young Creatives Grant. In 2019, Mullen curated her first solo exhibition at Stay Gallery in Downey, California. She then exhibited twice with Innerspace Gallery in Downtown Los Angeles. Her work is a part of private collections in Boston, Massachusetts, New York, New York, and Dallas, Texas. In November 2019, Post & Beam invited her to exhibit six unique works to represent a cultural perspective of Los Angeles. In 2021, Mullen showcased works with SoLA Contemporary Art Museum for their virtual pandemic fundraiser. She then, premiered at Thuh Film Festival's first annual film festival in Long Beach, CA. Recently, her work has appeared on Bel-Air, Season 1, Episode 6. As a commitment to consistently critically think, her practice as a painter, writer, and digital amplifier articulates her desire to create works that encapsulate the rebellion, sarcasm, and seriousness through visual and linguistic explorations